What to Know About Plea and Sentence Bargain in Lagos State. 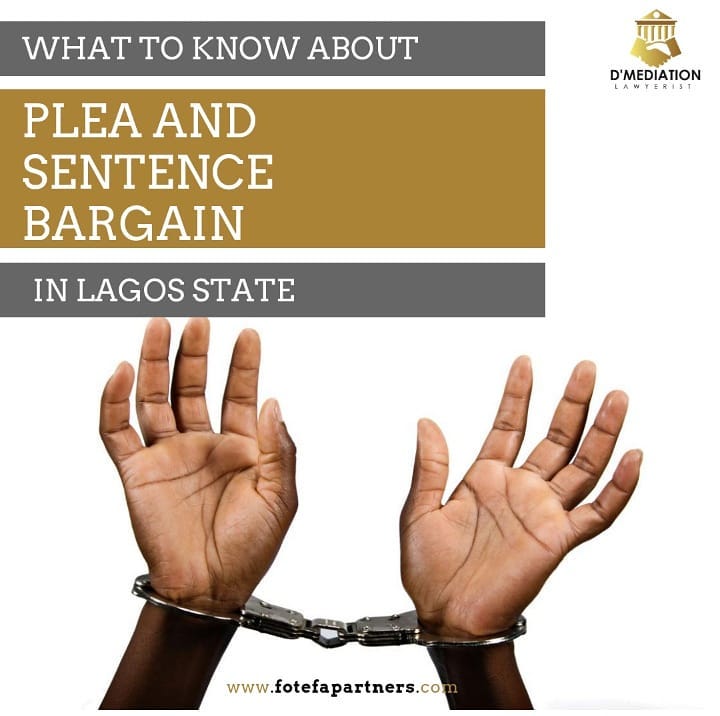 Q: WHAT IS PLEA BARGAIN?

ANS: This is the negotiation of an agreement between the prosecution and the defense whereby the Defendant is permitted to plead guilty to a reduced charge in exchange for a more lenient sentence or an agreement to drop other charges against the Defendant.

Q: ARE THERE ANY ADVANTAGES OF PLEA BARGAIN TO THE DEFENDANT?

Q: ARE PLEA BARGAINS AVAILABLE TO EVERY DEFENDANT?

“Notwithstanding anything in this Law or in any other law, the Attorney-General of the State shall have power to consider and accept a plea bargain from a person charged with any offence where the Attorney-General is of the view that the acceptance of such plea bargain is in the public interest, the interest of justice and the need to prevent abuse of legal process”.

Every offense is amenable to Plea Bargains but each case would be considered based on its peculiar facts in accordance with Plea Bargain Guidelines.

Q: WHY SHOULD A DEFENDANT ACCEPT A PLEA BARGAIN?

ANS: In considering whether to accept a Plea Bargain or not, a Defendant may consider several issues especially his chances of successfully defending the case against him during the trial.  Where such chances are slim, a plea bargain will be beneficial to the Defendant. A DEFENDANT MUST MAKE SURE HE SEEKS PROPER GUIDANCE FROM HIS COUNSEL BEFORE ACCEPTING A PLEA BARGAIN.

Q: HOW DOES THE ATTORNEY-GENERAL DECIDE?

ANS: In Lagos State, the Honourable Attorney-General makes his decisions based on recommendations from the Plea-Bargain Committee, a committee set up in the Directorate of Public Prosecutions for the purpose of considering cases referred for Plea Bargain.

Q: ARE THERE ANY ADVANTAGES TO THE PROSECUTION?

Q: ARE THERE ANY ADVANTAGES TO THE JUDICIARY?

Q: IS THE VICTIM ALLOWED TO PARTICIPATE IN THE PROCESS?

[a] after consultation with the Police Officer responsible for the investigation of the case and a reasonable feasible, the victim and

[b] with due regard to the nature of and circumstances relating to the offense, the Defendant and the interest of the community.

Q: ARE THERE FACTORS WHICH ACT AS GUIDELINES IN MAKING PLEA-BARGAIN APPLICATIONS?

The Plea Bargain Committee considers each Application separately based on the public interest, interest of justice and the need to prevent abuse of the legal process.  Several factors are considered including the following:

Q: HOW DOES ONE INITIATE PLEA BARGAIN UNDER THE ADMINISTRATION OF    CRIMINAL JUSTICE LAW OF LAGOS STATE?

ANS: The procedure for the approval of a plea bargain is as follows:

Q: IS THERE A GUARANTEE THAT THE DEFENDANT WOULD GET A GOOD BARGAIN?

In addition, Sections 76[6] – 76[7] provides that the Presiding Judge or Magistrate has oversight functions on the proposed Plea Bargain Agreement and has the final say on the proposed sentence.

Q: DOES AN APPLICATION FOR PLEA BARGAIN REQUIRE A PROCESSING FEE?

Credit: *Administration of Criminal Justice Law of Lagos State [ACJL], 2015* Office of the Honourable Attorney- General and Commissioner For Justice* Ministry of Justice